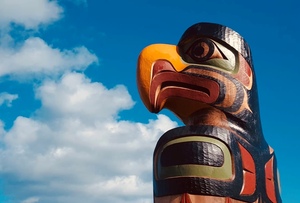 IN MEMORY OF OUR DEAR FRIEND JOHN LIVINGSTON -

John Livingston's Expertise and Experience in designing, carving and restoring, from small (7 ft) all the way up to large (40 ft) totem poles is world wide recognized. He has carved many Totem Poles in his career - please have a look at the images below - they are truly amazing!

These are just a few examples of John's work:

2) John Livingston is currently in the final stages of this 10 ft Eagle Totem Pole  which was a private comission, contemporary Layout, 4 1/2 ft x 1/2 ft thick Log, solid cedar, depicting the EAGLE in a sculptural style, the Eagle's head is turned to the side, also showing the Salmon. Absolutely stunning piece, Victoria, BC

Meaning: Totem poles are primarily visual statements about the ceremonial privileges and identity of those who erected them. The figures represented on totem poles are those beings from mythical times who became, or were encountered by, the ancestors of the group that later took them as crests. For instance, some Kwakwaka'wakw families claim as a crest the Thunderbird, who descended from the sky and took off his regalia and became their human ancestor. Others claim crests on the basis of encounters their ancestors had with supernatural beings. The erection of a totem pole would usually be celebrated by a potlatch. At this time, the stories pertaining to the crests they displayed were shown, and the rights of the family to claim the privileges were publicly witnessed. Especially important totem poles were those raised in honour of Chiefs by their successors. When a totem pole was commissioned, the artist was told which crest it was to show, but there is considerable evidence that he was given some degree of freedom as to how he chose to portray them. It appears that the artist also put into their designs hidden meanings and visual puns of their own. The meaning of the totem pole was, therefore, very personalized. Only the pole's owner and its carver can describe accurately its significance. Figures featured on the poles are family crests. These include the Eagle, Raven, Frog, Killer Whale, Grizzly Bear, Thunderbird and Dzunuk̓wa among others. Carved subsequent to the inhabitation of   in the late 19th century (1870), totem poles originating in  are perhaps some of the most familiar. Several of these poles are now found in   in . Others are featured in various museums across  and throughout the world. Not all totem poles have figures all the way down the pole. Some simply feature a single crest at the top, representing the most important family symbol. A Chief could claim kin alliances with several groups. Of these, the most important would often go on the very top of the pole. Our old people believed that nothing lasts forever. When a Totem Pole falls to the earth or something was damaged on it, it has served its purpose and it is time to let it go. This is why poles are not always maintained or repainted.

Photos of This Piece

Gone way to soon! We will miss you, John! Thank you for being such a good friend! Master carver John Livingston was born in Vancouver, on the Northwest Coast of British Columbia, Canada in 1951. Nation: adopted Kwakwaka'wakw. John started his... END_OF_DOCUMENT_TOKEN_TO_BE_REPLACED

New artwork is added every week! Make sure you check frequently so you don't miss out....and subscribe to our quarterly newsletter with special announcements.