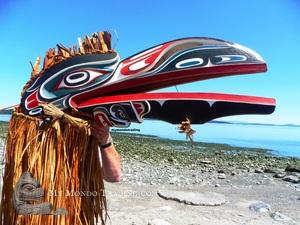 THIS PIECE IS SOLD - BUT.....if you are interested in one of Tom's large Raven's, please don't hesitate to contact me

What an incredible piece of indigenous art - you don't see these often!!

The superb quality of this piece is just incredible. Master Artist Tom Hunt from the Kwakwakaw'wakw First Nation truly put all his love for this art into this piece. Have a close look at the images please, they speak for themselves.

This piece is so amazing, so powerful - the expression is just excellent. The carving shows extreme high quality of craftsmanship, the painting is clean with traditional colors. The beak is articulated and the clapping sound is truly strong and impressive. The bark from the cedar tree is attached all around - so is the rope.

Hamatsa is the name of a Kwakwaka’wakw secret society.  During the winter months the Kwakwaka'wakw peoples have many ceremonies practiced by different secret societies.

The Hamatsa society is the most prestigious of all. It is often called a "cannibal" ritual, and some debate has arisen as to whether the Kwakwaka'wakw do or do not practice ritual cannibalism, whether their "cannibalism" is purely symbolic, or literal. Because of the secret nature of the society the answer is not forthcoming.

Central to the Hamatsa ceremonies is the story of some brothers who became lost while on a hunting trip and found a strange house with red smoke emanating from its roof. When they visited the house they found its owner gone, but one of the house posts was a living woman with her legs rooted into the floor, and she warned them about the frightful owner of the house, who was named Baxbaxwalanuksiwe, a man-eating giant with four terrible man-eating birds for his companions (including man-eating raven; Crooked-Beak of Heaven; and Huxhukw/supernatural crane who cracks skulls of men to suck out their brains. One version of the story describes the giant with mouths all over his body. According to another version, the brothers lured Baxbaxwalanuksiwe into a pit and threw hot stones on top of him until he died. With the death of the giant, the men gained mystical power and supernatural treasures from him. These included wooden whistles, a bear mask, bird masks, costumes, and a Hamatsa pole, all used in later actual rituals. Variations of the myth abound within the Kwakiulth culture, but this man-eating giant was aided by an old hag, Qominoqa (possibly Dzunukwa) who gathered bodies for him to consume.

In practice the Hamatsa initiate, almost always a young man at approximately age 25, is abducted by members of the Hamatsa society and kept in the forest in a secret location where he is instructed in the mysteries of the society. Then at a winter dance festival to which many clans and neighboring tribes are invited the spirit of the man-eating giant is evoked and the initiate is brought in wearing spruce bows and gnashing his teeth and even biting members of the audience. Many dances ensue, as the tale of Baxbaxwalanuksiwe is recounted, and all of the giant man-eating birds dance around the fire. Finally the society members succeed in taming the new "cannibal" initiate. In the process of the ceremonies what seems to be human flesh is eaten by the initiates

The Mask will be sold with a beautiful wooden stand - pictures will become available soon. Also, the mask can be prepared for ceiling hanging!

Photos of This Piece

Tom D. Hunt, also called Watawidi, is the son of Hereditary Chief George Hunt and May Hunt. Tom D. Hunt is a member of the Kwakiutl, or Kwakwaka’wakw Nation, born in 1964. Tom began apprenticing in Kwakiutl art with his father at the age of... END_OF_DOCUMENT_TOKEN_TO_BE_REPLACED

New artwork is added every week! Make sure you check frequently so you don't miss out....and subscribe to our quarterly newsletter with special announcements.